March 9 is the birthday of Amerigo Vespucci, Italian cartographer and explorer after whom two continents are named. I love historical mix-ups and this is one of my favorites.

Amerigo had indeed visited the New World in 1499 and 1502. His writings about these voyages became well-known in Europe and in 1507, a German cartographer, Martin Waldseemüller, made a new map that included the New World.

He was aware of Vespucci’s writings but not of Columbus’s expeditions. Consequently, he mistakenly thought Vespucci was the first to discover this new land and so named it after him.

Of the 1000 copies Waldseemüller is said to have made, there is only one intact copy. It was found in 1901 by a Jesuit priest and historian in the library of a German prince.

It was purchased by the Library of Congress in 2001 for $10 million. It is the first map to include the name “America” and the first to depict the Americas as separate from Asia. 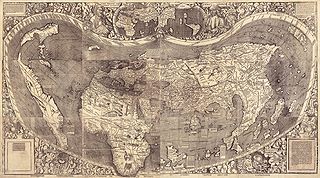 {{PD-old-100}} The map is in the public domain because the copyright has expired in countries and areas copyrighting works for life plus 100 years or less.