“World Day Against Cyber Censorship is an online event held each year on March 12 to rally support for a single, unrestricted Internet that is accessible to all and to draw attention to the ways that governments around the world are deterring and censoring free speech online. The day was first observed on 12 March 2008 at the request of Reporters Without Borders and Amnesty International. A letter written by Jean-François Julliard, Secretary-General of Reporters Without Borders, and Larry Cox, Executive Director of Amnesty International, was sent to the Chief Executive Officers of Google, Yahoo!, Inc., and Microsoft Corporation to request observation of the day. The annual event is symbolized by a logo created by Reporters Without Borders consisting of a computer mouse breaking free from a chain.” 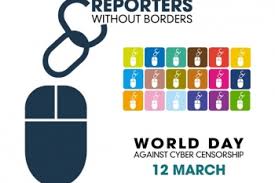