International Asteroid Day is an annual event which is held on the anniversary of the Siberian Tunguska event that took place on June 30th 1908. It is unclear whether the explosion was caused by a comet or an asteroid, but it flattened 22,000 square kilometers of forest.  There were no known human casualties.

Asteroid Day was founded 2014 by filmmaker Grigorij Richters, Apollo 9 astronaut Rusty Schweickart, Queen guitarist and astrophysicist, Brian May, and the B612 Foundation, a NGO dedicated to the defense of the Earth against asteroids. Over 200 astronauts, scientists, technologists and artists signed the Asteroid Day Declaration.

According to NASA,  “Every day, Earth is bombarded with more than 100 tons of dust and sand-sized particles.  About once a year, an automobile-sized asteroid hits Earth’s atmosphere, creates an impressive fireball, and burns up before reaching the surface.  Every 2,000 years or so, a meteoroid the size of a football field hits Earth and causes significant damage to the area.  Only once every few million years, an object large enough to threaten Earth’s civilization comes along. Impact craters on Earth, the moon and other planetary bodies are evidence of these occurrences.” 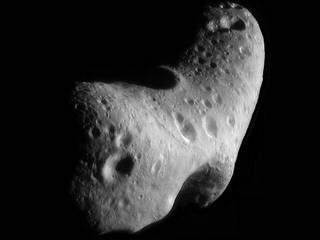 This image, taken by NASA’s Near Earth Asteroid Rendezvous mission in 2000, shows a close-up view of Eros, an asteroid with an orbit that takes it somewhat close to Earth.