Anniversary of the Opening of the Sydney Opera House

The Sydney Opera House was formally opened on 20 October 1973 by Queen Elizabeth II. Jørn Utzon’s masterpiece of modern architectural expression has a history just as apt and telling as the building itself.

In 1955 when New South Wales was in need of a performance center, then-Premier John Cahill issued an international competition. Jørn Utzon’s design won and would become colossal in every way. Ground-breaking in its design, prodigious in terms of time (16 years) and money (102 million pounds,) and phenomenal in terms of the emotions it raised both good and bad.

The backstory of the building is that of genius confronting reality. The first mistake was the government’s insistence on beginning construction when the plans had not been finalized. Many features had be be redone ultimately costing both time and money.

Jørn Utzon’s concept was so daring that he himself could not anticipate all the factors and had solve problems step by step as construction progressed. The system of shells or spheres made the construction very complex and it is one of the first buildings that used computer assisted structural analysis.

The project progressed slowly, but relatively amicably until the next election. In 1963 there was a new government and a new director of Public Works. The new administration did not support Utzon and refused to pay him. In 1966 when Utzon was owed 100,000 pounds, he left Australia and never went back.

Elizabeth Farrelly (2008,) an Australian architecture critic, said it was “the triumph of homegrown mediocrity over foreign genius.”

It was the unhappy fate of another Australian architect to take over and complete most of the interior. However no one one could replace Utzon and much of the interior not only lacks Utzon’s vision, but has seating, acoustical, and ventilation problems.

When the Opera House opened in 1973, Jørn Utzon was not invited nor was his name mentioned.

In the late 1990s, the Opera House Trust attempted a reconciliation, and in 1999 Utzon was appointed a design consultant for future work. In 2004, the first interior space rebuilt to an Utzon design was opened and named “The Utzon Room.” It contains an original Utzon tapestry (14.00 x 3.70 metres) called Homage to Carl Philipp Emmanuel Bach.

Jørn never returned to Sydney. His son Jan, also an architect, understands his father’s vision and works with the Opera House Trust to carry out revisions and restorations. One such revision includes sinking the floor of the theater to expand the pit, improve seating, and make room for a ceiling with better acoustics.

Utzon died on 29 November 2008. Ironically, his funeral was held in the Opera House where he was praised by dignitaries around the world. 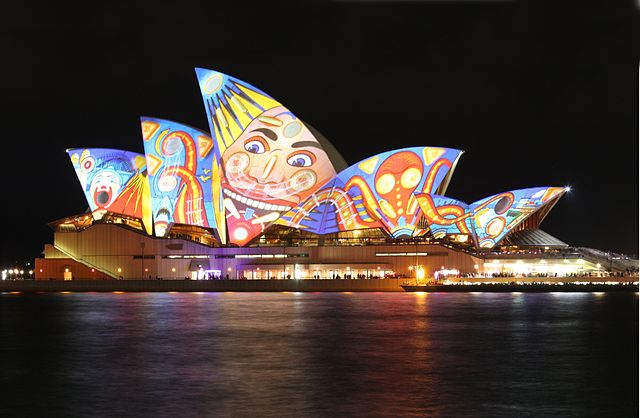 This image of the Sydney Opera House during Vivid Sydney 2013 was created by Adam. J. W. C. and is licensed under CC Atributtion-Share Alike 2.5 Generic license.