It seems we’re on a roll with Germay.  Martinisingen (pronounced Martini-zingen)is an old Protestant custom which is found especially in East Friesland, but also on the Lüneburg Heath and in other parts of Northern and Eastern Germany. Traditionally 10 November was the day on which farmhands and ordinary workers were dismissed for the winter. These folk, most of whom had no property, then had to survive the coldest time of the year without any income. However their children were able to help by going from house to house on this day and begging for food and gifts, especially from the well-to-do farmers and citizens. They collected food that was then stored as part of their family’s winter stock.

With the outbreak of the Reformation, the original motive of begging to supplement winter food supplies became interwoven with religious aspects, particularly those honouring the reformer, Martin Luther, and the festival became the Protestant church’s version of the Feast Day of St. Martin or Tours, which is held on November 11. 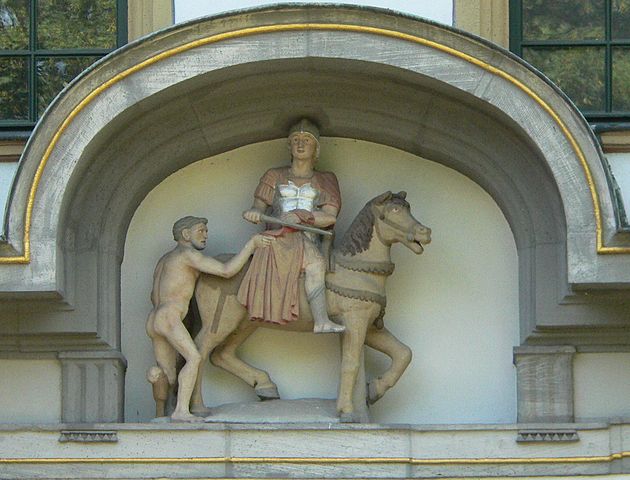 This statue of Saint Martin Cutting his Cloak in Two to give to someone who had none is above the Höchst Castle’s gate in Frankfurt. Photo credits belong to Eva K. and is licensed by a GNU Free Documentation License, Version 1.2 or any later version.