The Formation of the Earth

The Universe in One Year was inspired by the late astronomer, Carl Sagan (1934-1996) to illustrate the 13.7 billion years since the Big Bang that supposedly created the universe as we know it. According to The University of Victoria AstroPhysics Department, in this representation, the Earth was formed on September 14. 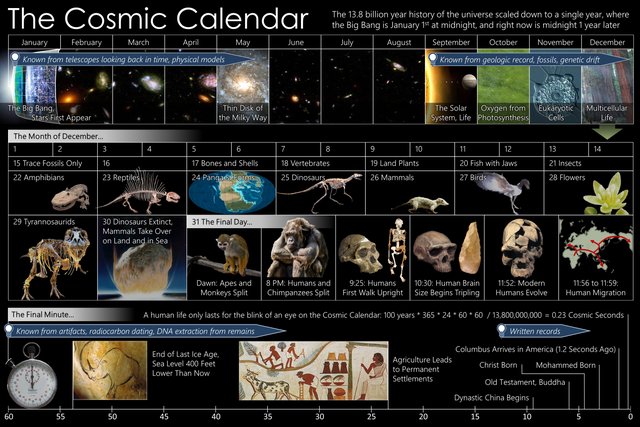 This image of the Cosmic Calendar was created by Efbrazil and is licensed under the Creative Commons Attribution Share-Alike 3.0 Unported license.

Fast forward to 1990. “Pale Blue Dot” is a photograph of planet Earth taken on February 14, 1990, by the Voyager 1 space probe from a record distance of about 6 billion kilometers (3.7 billion miles.)  The Earth appears as a tiny blueish-white speck approximately halfway down the brown band to the right.

“Pale Blue Dot” is in the public domain because it was solely created by NASA. NASA copyright policy states that “NASA material is not protected by copyright unless noted.”

Disclaimer: The information on this website is accurate to the best of my knowledge at the time of writing. I make no guarantee as to its accuracy. Its purpose is to inform, educate, amuse, and raise awareness about causes and opportunities around the globe. I also encourage civil debate in the comments.